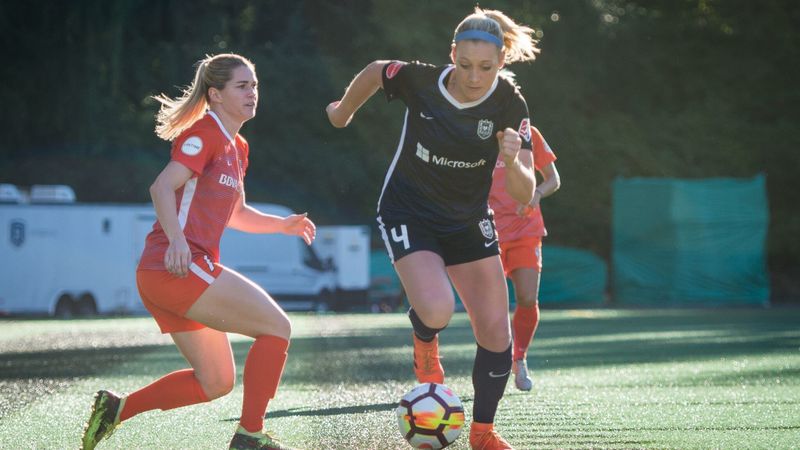 The World Cup is over which leaves all the focus turned to the NWSL. The players from the UWSNT and other World Cup teams are on various clubs all throughout the league. But just because Alex Morgan, Carli Lloyd or Rose Lavelle might not be playing that night or for a specific team does not mean you should not still tune in. The NWSL is flooded with talent and we have created a weekly series that looks at players in the NWSL who did not go to France this summer, but could very well turn into your new favorite player. Next up in our series is Megan Oyster.

When looking at top players people often turn to statistics and specifically score sheets. But that really favors the offensive players who contribute goals and assists. So what about the defenders who make bruising tackles, goal saving stops and the initial passes for goal sequences? The stat sheet does not tell their full story, but players like Megan Oyster deserve a lot of the credit for their team’s success.

She has been a part of the NWSL since 2015 when she was drafted by the Washington Spirit. She played every match for the Spirit in her first year and was named Newcomer of the Year and Defender of the Year for the club. However, after her second season Oyster was traded to the Boston Breakers. She played two seasons for the Breakers before the team folded and Oyster was selected by Reign FC in the Breakers Dispersal Draft.

Since joining the Reign, Oyster has started all but three games and only been subbed off twice. Last season the Reign, with the help of Oyster, had a league tying record of 12 clean sheets and only gave up 21 goals.

Defenders have to be precise with their tackles and clear the ball out of the defense without harming the offensive player. For the Reign, Oyster has averaged a 76.1% success rate for her tackles and only committed 28 fouls with zero yellow cards. When Oyster goes in for a tackle she ensures she is going to get the ball.

Not only does Oyster tackle efficiently she also has key clearances to keep the offense from even getting close to scoring a goal. She is instrumental on set pieces and can knock the ball out of harm with a quick touch.

The month of June meant no national team members in the NWSL with the World Cup going on. Oyster shined for the Reign and earned herself on the NWSL Team of the Month for June.

Oyster has played in all of the games this season for the Reign and has played a full 90 minutes in 13 straight matches. She is the team’s workhorse intercepting 31 passes this year with 12 blocks. Oyster is a true defender who understands her main role is to guard the goal and not attack the other team’s net. She has only scored four goals in her NWSL career, but has certainly stopped plenty of others from going in.

The Reign have been riddled with injuries this season. They currently have six players with season ending injuries and five more players listed as out for their upcoming game. Even with the injuries the Reign are in fourth place and just four points out from first place. Thanks large in part to Oyster the Reign have given up the fourth fewest goals all season, but their offense has scored the second fewest amount of goals.

Their next game happens to be against Sky Blue, the NWSL team with fewest amount of goals scored. This game will most likely not be high scoring, but Oyster and company will ensure the fans see plenty of defensive stops.

All eyes should be peeled to the match that had to be moved to Red Bull Arena, home of the MLS team, the New York Red Bulls, to accommodate all of the fans. Sky Blue is hoping for a lower bowl sellout and quite possibly their highest fan attendance in club history. The two teams will kickoff on Sunday at 1 pm ET on ESPNEWS