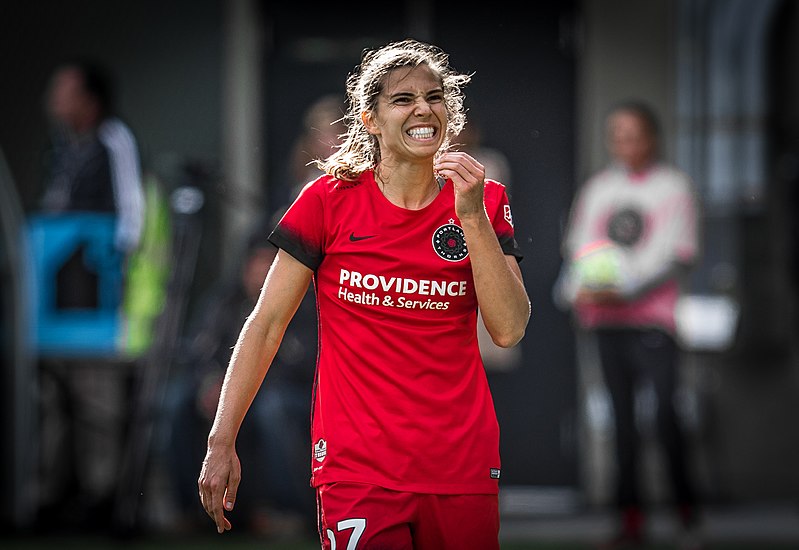 A weekly series where we break down the top performances of players in the NWSL.

The first player of the week comes from an unlikely source, the struggling New Jersey side, Sky Blue FC. It was rookie forward Paige Monaghan who scored a brace for Sky Blue to lift them over a hot Chicago Red Stars team.

Monaghan first impacted the game in the 71st minute when she received the ball near the end line before cutting it back and firing a rocket into the top right corner among three enclosing defenders. The goal was truly sensational, and it was the first of Monaghan’s career. There could not have been a better way to open her scoring account in the NWSL. Monaghan struck again in the dying moments of the game with a 93rd minute winner. This time, the rookie latched onto a through ball and used her left foot to beat the Red Stars keeper to her near post with well-placed curling effort. The win was only Sky Blue’s third of the season, but their second against the Red Stars.

The win for Sky Blue snapped the Red Stars five game winning streak. With the victory Sky Blue was able to pull themselves out of last place in the table. The Red Stars missed out on a crucial opportunity to propel themselves into first place and sit in second still four points back of the leaders. Sky Blue faces off next against the Houston Dash on Saturday, August 24th at 8:30 pm ET on Yahoo! Sports.

The second player of the week is a repeat offender in Amy Rodriguez. Rodriguez scored a 77th minute winner in a 2-1 victory over the Orlando Pride. It was the intelligent diagonal run of Rodriguez that allowed her to find a perfect pass and dispatch a calm finish over the Pride goalkeeper.

Rodriquez who plays for the Utah Royals has now scored three goals in her last three games. Rodriguez continues to prove her ability to show up in the big moments as this goal was defined as the winner. All of them have been crucial in the Royal’s recent success as they have won three straight and moved up the league table into fourth place just six points off the top spot. The goal was Rodriguez’s eight of the season. The Royals have scored eight in their last three games and only given up one over the past three games. Utah’s next match will be against the Washington Spirit today at 7:30 pm ET on Yahoo! Sports.

The third and final player of the week is the league leader’s Tobin Heath who plays for the Portland Thorns. Heath played a very complete game and recorded an assist on the Thorns 3-1 victory over the Washington Spirit. The assist came from Heath in the 19th minute when she swung a dangerous ball into the box off a corner which was met by the head of Emily Sonnett. The goal doubled the lead of the Thorns and gave them a comfortable cushion over the Spirit.

While Heath will not be credited with the assist on the third goal, it was her delivery again from a corner kick that caused a scramble in the box and ultimately resulted in the Thorns third and final goal.

With the assist, Heath has hit 25 career assists which is the most of any NWSL player. The victory pushes the Thorns four points clear of second place and puts them in good position to remain atop the league table. The next match for the Portland Thorns will be against the second place Chicago Red Stars on Sunday, August 25th at 3 pm ET on ESPNEWS.