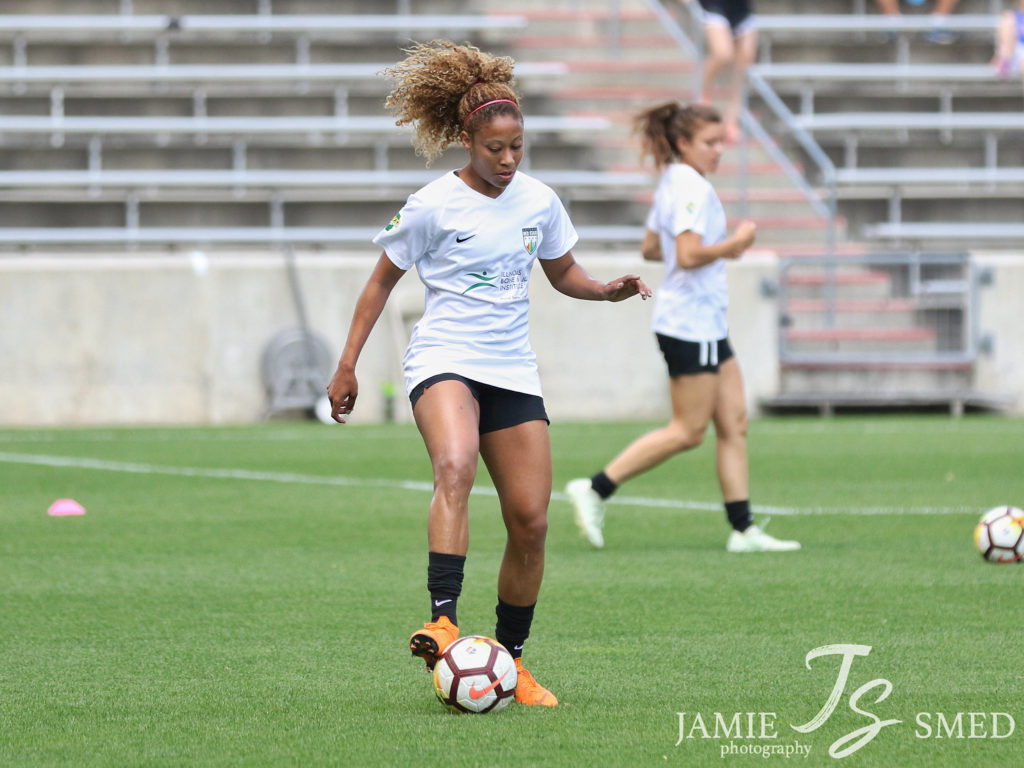 Lynn Williams who plays for the first-placed North Carolina Courage is the first player who highlights this week’s edition of NWSL Players of the Week.

Williams scored four goals over two games in the past week. On Wednesday, September 11,Williams played a big role by scoring a hat-trick in a 6-0 statement win, on the road, against the second-placed Portland Thorns who have sat atop the NWSL table for much of the season. After already being up 1-0, it only took Williams 21 minutes to get on the board when she tapped home a Debinha shot turned cross. After only a minute Williams got her second in similar fashion when she used her left foot to tap home a low cross from the right wing. In both of her first two goals the close proximity gave Thorns goalkeeper Adrianna Franch no chance. Williams secured her hat-trick in the 67th minute when a Courage counter-attack set up a 3v2 advantage. Debinha drew in the defense and slipped a pass to Williams who made no mistake and fired a shot past Franch at her near post. The goal increased the lead to 5-0. On Saturday, Williams tallied one goal in another demolition job when the Courage beat the Orlando Pride 6-1. Williams grabbed her goal early in this one after she guided a Kristen Hamilton cross out of the air past the Pride goalkeeper from a few yards out. The last four goals has brought Williams total to 11 on the season. The Courage are riding a wave right now after beating their last two opponents by a combined score of 12-1. The Courage sit in first place with 40 points which is four clear of the second-place Thorns. The Courage also have a game in hand. Lynn Williams and the Courage are next in action Tuesday, September 17 when they take on the Houston Dash.

The next player of the week is Sofia Huerta who plays for the Houston Dash and scored two goals to propel the Orange past the fourth-placed Utah Royals. The luck was with Huerta and the Dash on this Friday the 13 as they slipped past the visiting Royals for a final score of 2-1. Huerta gave the Dash the lead in the 27 minute after an intelligent backheel pass from Kristie Mewis fooled the Royals defense and allowed Huerta to place a finish in the bottom left corner from close range. Huerta struck again in the 62 minute when Daly sent a ball into space down the right wing. Huerta used her pace and intelligence to slip in behind the Royals defense. She then controlled the pass and went for power as she fired a shot that flew past the Royals goalkeeper off the crossbar, down and into the net for 2-0. The pair of goals brings Huerta’s tally to five on the season. The second goal was vital as it proved to be the winner and give the Dash a much-needed cushion to avoid losing three straight games. The win leaves the Dash in seventh place only a point behind the Washington Spirit in sixth. The Houston Dash are next in action when they take on the North Carolina Courage on Tuesday.

The third and final player of the week is Casey Short a defender who plays for the Chicago Red Stars. On Wednesday, September 11, Short scored the game winning goal for her side in dramatic fashion against the Orlando Pride. Her goal came in the fifth minute of stoppage time to give the Red Stars all three points in the competition. On top of that, the Red Stars played the remaining 30 minutes of the competition with only ten players after Katie Johnson was issued a second yellow. Short was involved in the initial attack that won the game as her first shot attempt was blocked. The ball was then redistributed to Sam Kerr on the right wing who floated a ball in which was to be the last action of the game. Short showed determination as she came from no where to rise above her marker and power a header through the Pride goalkeeper. The header which was close to Orlando Pride goalkeeper Ashlyn Harris was too powerful as it skipped off her gloves into the back of the net for the winner. The goal which was only the defender’s second of the season, but was a monumental one as it brought the third-placed Red Stars within one point of second place. The Red Stars would go on to win their next matchup against Sky Blue FC handily by a score of 3-0. That win is the third in a row for the Red Stars who now sit in second place behind the North Carolina Courage. The Chicago Red Stars are next in action against the Washington Spirit on Saturday, September 21.