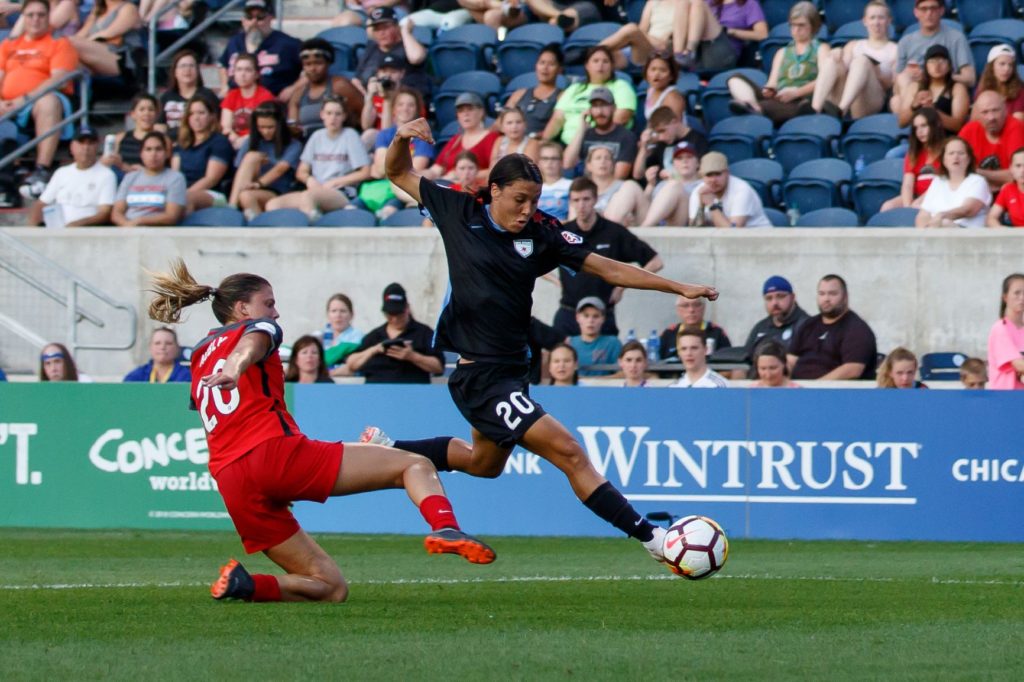 The first player of the week, or double week really is Sam Kerr who plays for the Chicago Red Stars. On Saturday September 21st, Kerr tallied two goals against the Washington Spirit in an important 3-1 win for the Red Stars. The two goals were Kerr’s 17th and 18th of the season which breaks the season goal-scoring record. Kerr’s 17th goal tied her own record and then her second of the game broke it. The Australian attacker has scored five goals over her last five matches.

It only took Kerr nine minutes to tie her record after she chipped a delightful finish over the Spirit goalkeeper and into the far corner from a tight angle. Katlyn Johnson was credited with the assist. Kerr then broke her record in the 49th minute when Yuki Nagasato used the outside of her foot to deliver a through ball down the left side right into the path of Kerr who then cut in and fired back into the near post beating the goalkeeper easily. The 3-1 win was Chicago’s fourth in a row before they went on to make the streak five in a 2-1 win over the Utah Royals. The five-game winning streak has slingshotted the Red Stars into second place only two points back of the first place North Carolina Courage. The Red Stars have finished all of their regular season matches and have secured a second-place seeding for the postseason.

Due to the recent play of Kerr she was awarded the NWSL Player of the Month, league officials announced on Wednesday.

Nothing slowed @samkerr1 down in September. pic.twitter.com/fVH4lBfBey— NWSL (@NWSL) October 2, 2019

The second player of the week comes in the form of goalkeeping greatness from Aubrey Bledsoe who plays for the Washington Spirit. The Spirit goalkeeper was up to the task when she tallied seven saves against the offensive powerhouse and first placed North Carolina Courage. The Courage have been on a tear lately scoring sixteen goals in their four previous games. Bledsoe came up big, time and time again in the Spirit’s 2-1 win over the visiting North Carolina Courage on Saturday September 28th. The win gave the sixth placed Spirit a chance to still make the playoffs. Other results around the league have since ended that possibility, but the performance from Bledsoe could not be discredited. The win ended a six game winning streak for the Courage.

In the 21st minute Bledsoe was called into action when a Courage corner kick fell to Debinha on the far side. Bledsoe reacted quickly to Debinha’s shot and was able to direct the rebound out of danger.

.@AubreyBledsoe up to the task as always ❌

In the 38th minute it was Lynn Williams this time that was denied by Bledsoe from close range as she did a tremendous job to close down on Williams and keep the score knotted at 0-0. Bledsoe denied Williams again in the 65th minute when she got her angles just right in order to keep the ball out of the net. Over the course of 22 games Bledsoe has been able to tally eight clean sheets. The Washington Spirit are next in action on Saturday, October 5th when they travel to Orlando to take on the Pride.

The last player of the week is rookie Bethany Balcer who scored in yet another game for the Seattle Reign. Balcer has now scored six goals on the season, but has been on fire lately with three goals in her last four matches. Her goal was the second of two as the Reign picked up an impressive 2-0 win against the Portland Thorns who have been out of form as of late. The victory for the Reign has secured them the last remaining postseason spot and gives them the opportunity to finish as high as third considering they win their final match and Portland loses or draws. The victory was an important one as it ensures the Reign a place in the postseason. Jodie Taylor tallied the other goal on the day.

In the 81st minute of play Balcer received a pass with her back to goal from about 14 yards away. The defender was not tight, which allowed Balcer time to turn, cut in quickly onto her left foot and rifle a low dipping shot into the right corner catching the Thorns goalkeeper out at her near post. The swiftness with which Balcer snapped the shot on frame seem to cause a late reaction from the Thorns goalkeeper and Balcer wheeled away to celebrate. Balcer will be a player to watch as the Reign move forward into their last game of the season and into the postseason. The Reign are next in action on Saturday, October 12th when they travel to Orlando to take on the Pride in their last regular season match-up.

All remaining matches can be seen on the YAHOO! Sports Network.