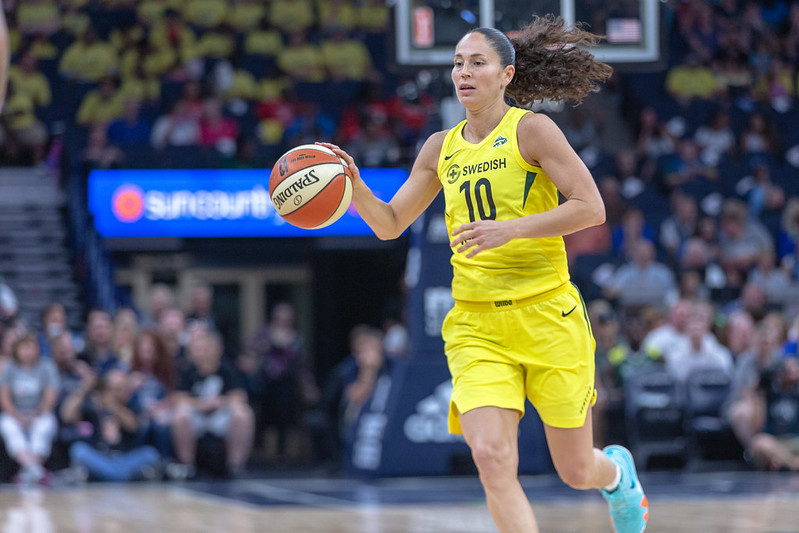 The WNBA is back for the 2020 season competing at the IMG Academy in Bradenton, FL. The first game tips off today (7/25) at 12 pm ET on ESPN with the Seattle Storm and the New York Liberty. 22 regular season games will decide which of the 12 teams will earn a spot in the postseason.

Like most sport leagues picking back up, COVID-19 and social justice has impacted the restart. Big name players are sitting out the season due to health concerns or the desire to focus their efforts on the issues across the United States.

Teams will have to adjust and look to other players to step up. Will the usual suspects rise to the occasion or will a team often on the outside looking in win the 2020 WNBA Championship?

Below is a breakdown of what to expect for the upcoming season.

Who Won’t Be There?

Understanding how the season will shape up has a lot to do with who is at IGM Academy and who is electing to stay home.

The defending Champions of the Washington Mystics may have been hit the hardest with missing players. What first looked like an exciting off-season for the mystics signing the 2012 MVP and five-time All-Star Tina Charles has turned into a roster of lesser known players. Reigning MVP Elena Delle Donne penned a letter in the Player’s Tribune detailing her battle with Lyme disease and the WNBA not granting her a medical waiver. Despite the ruling Delle Donne will not be in Florida with the team nor will Charles (medical waiver for extrinsic asthma) or Natasha Cloud (fight for social justice).

A successful season last year for the Las Vegas Aces reaching the WNBA semifinals looked to be duplicated or bettered this season. However All-Star Liz Cambage and JiSu Park have opted to sit out, not to mention Kelsey Plum will miss the whole season due to a torn achilles.

The Los Angeles Sparks will also look to replace three key players in Chiney Ogwumike, Kristi Toliver and Maria Vadeeva who have all opted out. Same for the Atlanta Dream since Renee Montgomery, Tiffany Hayes and Maite Cazorla are opting out.

Just as the New York Liberty are looking to rebuild after losing Charles to Washington they will have to do so without some notable players. Their three internaional players in Steohanie Talbot, Marine Johannes, and Han Xu will remain overseas while Rebecca Allen and Asia Durr have opted out for the season.

Far from their powerhouse lineup from 2016 the Minnesota Lynx will have plenty of new faces this season. They will miss Maya Moore once again as she continues to sit out from basketball for social justice. Jessica Shepard and Cecilia Zandalasini are sitting out this season for personal reasons.

Teams like the Phoenix Mercury, Indiana Fever, Seattle Storm, Chicago Sky, Connecticut Sun, and the Dallas Wings have only one or none players missing the 2020 season. Jessica Breland (medical exemption) for Phoenix, Bernadett Határ (injury) for Indiana, Jantel Lavendar (foot surgery) for the Sky, Jonquel Jones (opted out) for Connecticut and Imani McGee-Stafford (pursuing law degree) for Dallas.

A league not known for players changing teams very often had plenty of surprises this year. If you picked a team for your favorite player you may be changing allegiance.

The Mercury traded away longtime player DeWanna Bonner, but ended up landing one of the most versatile players in the league in Skylar Diggins-Smith. Having sat out last season due to maternity leave, Diggins-Smith’s 2018 stats do enough explaining of what kind of player the Mercury just picked up averaging 20.7 PPG along with 7.2 RPG and shooting 56.4 FG%.

Another player who sat out the 2019 season only to join another team in 2020 is Angel McCoughtry. Known for her scoring in both the regular season and post season scoring coupled with her lock-down defense McCoughtry is a player every team hopes to have. The Aces are the ones who will be benefiting from her. While they will have to wait to see what McCoughtry paired with Cambage looks like the duo of A’ja Wilson and McCoughtry will be on full display this season.

Rivals become teammates this season as Seimone Augustus joins the Los Angeles Sparks after spending 13 years with the Minnesota Lynx. Augustus currently ranks 11th all time for scoring in the WNBA and the Sparks will hope she has plenty of points left in her after and injury crippling 2019 season.

With so many key veterans missing the upcoming season a lot of responsibility will fall to the rookies. Aside from the Phoenix Mercury and Las Vegas Aces every WNBA team has rookies ready to make an impact.

Six of the seven rookies were picked up in the draft (Joyner Holmes as signed as a free agent) and picked within the first 15 draft spots. The two most notable are Ionescu and Megan Walker. Ionescu who you may know as the first player in NCAA history to reach 2,000 points, 1,000 rebounds and 1,000 assists or earning the most career triple-doubles with 26. Walker spent just three seasons at UConn, choosing to leave a year early for the WNBA and in her last season she averaged 13.7 PPG, 1.3 APG with a 38.3% FG%. Ionescu will have to wait a bit longer to try and work with Walker, since Walker tested positive for COVID-19 but is now in Florida following quarantine protocol.

If the play from the NCAA can translate to the WNBA and translate fast the Liberty will be the biggest for that experiment.

Ionescu may be the most known rookie and the most anticipated but the player that people are projecting to have the biggest WNBA career is Chennedy Carter with the Atlanta Dream. After watching her explosiveness at Texas A&M the Dream drafted her #4, their highest draft pick since their last franchise player Angel McCoughtry. With McCoughtry joining the Mercury in the off-season the Dream hope Carter’s 21.3 PPG and 4.3 RPG will carryover this year.

The Dallas Wings had three picks in the first seven draft spots including the #2 pick with Satou Sabally. On a star studded Oregon Ducks team Sabally averages 16.2 PPG, 6.9 RPG, and a 46.4 FG%. Perhaps the most athletic rookie in the draft class.

A team that is in need of a rookie to immediately add impact is the Indiana Fever. The last three seasons the Fever had one of the worst records in the league, but they’re hoping their #3 draft selection Lauren Cox can help turn things around. A key member on Baylor’s 2019 NCAA Championship team and one of their leaders that helped them throughout the season. Cox has versatility making her a fantastic rebounder and natural scorer.

How the Season Shapes Up

Skylar Diggins-Smith will be in a new environment with plenty of veterans around her not having to carry the majority of the weight. The frees up Diggins-Smith to be a playmaker like fans have seen her before. Look for her assists to go up with Griner and her ability to get open will see her scoring go up as well.

ROOKIE OF THE YEAR

Lauren Cox is not joining the best team in the WNBA rather a team still looking to find their identity since Tamika Catchings retired in 2016. Cox will not be the same player as Catchings but that isn’t what the Fever need. Cox will get to work alongside Natalie Anchonwa and TeairaMcCowan in the post along with Kelsey Mitchel and Tiffany Mitchell at the guard. Cox has proven she can score (10.1 PPG) along with dish out assists (5.0 APG), not to mention what she can do on the defensive end. The Fever and Cox are the perfect recipe for one another to have a big year.

An entire WNBA preview article and neither of Sue Bird or Diana Taurasi have been mentioned. No they are not skipping the season or moved teams for the first time in their career. In fact this could be a big season for both of them. 22 regular season games over the course of seven weeks is the perfect recipe for the longtime veterans along with no wear and tear from long travel days. For a long time since both teams were in the Western Conference they could not meet in the Championship but this could be the year.

Bird is joined along Breanna Stewart coming off an MVP season in 2018 and missing 2019 due to injury, Natasha Howard the reigning Defensive Player of the Year, a healthy Jewel Lloyd, and free agent pick up in Epiphanny Prince. Stewart and Bird were missing due to injury last year and Seattle still earned a playoff spot, look for this duo to carry them to the Championship.

Taurasi has been riddled with injuries lately in unable to compete an entire season for Phoenix, but committing to just 22 regular season games will hopefully be in the cards for her. Losing Bonner who made up the Mercury’s Big 3 alongside Taurasi and Griner was a blow, but picking up Skylar Diggins-Smith could be equally exciting. Running a guard system with Diggins-Smith and Taurasi will free up space for both playmakers and give Griner double the players giving her the ball down low. If these three can gel look for them to face off against the Storm in the Championship.